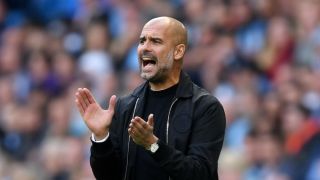 If Manchester City fail to defend their Premier League title Pep Guardiola insists it will not be down to their focus wavering.

Goals from Raheem Sterling and Sergio Aguero saw the champions to a 2-0 win over Brighton and Hove Albion at the Etihad Stadium on Saturday, taking their points haul to 19 from a possible 21 this season.

That matches the start City made en route to a record-breaking title triumph last time around and Guardiola likes what he is seeing ahead of a pivotal week.

A trip to Hoffenheim following their surprise opening loss to Lyon in the Champions League precedes next weekend's visit to title rivals Liverpool.

Asked for his assessment of City's performance by BBC Match of the Day, Guardiola replied: "Outstanding. We cannot forget against which team we played. They beat [Manchester] United and at Anfield they made a good performance. They are so solid.

"Our positional game controlled it. We did not concede one shot on target and that is not easy.

"We defended the long balls and set-pieces well and the way we played was so good.

"The important thing is what we have done after seven games. We are the same team we were last season. No complacency and everybody fights. The intensity we play without the ball, that is the most important thing.

"Of course we can lose games, of course we might not reach the next round of the Champions League. But no one can say we do not respect our profession and our fans.

"To win and be stable after seven games, I am so satisfied and so pleased."

PEP: I’m a lucky guy to have this group of fantastic human beings.Every time we lost the ball, we recovered and attacked with players at the edge of their penalty box. That is a dream for us.September 29, 2018

Leroy Sane's livewire pace was to the fore on Sterling's counter-attacking opening goal in the 29th minute and both wingers earned praise from their manager.

"There are situations like on the first and second goal when the opponents go forward. With Rash and Leroy on the counter-attack, they are so fast. We also miss Kevin De Bruyne in those situations," Guardiola explained.

"We cannot forget they are so young. As much as they play and try to correct what they have done which is not good, they will improve.

"Raheem Sterling is a guy who likes to be in the box to score goals and create chances. We are happy with both their performances."

Brighton manager Chris Hughton was satisfied with his players' efforts and felt the visitors should have been awarded a penalty during the closing stages, when Fernandinho misjudged a headed clearance from a corner and the ball struck his arm.

"In my opinion, yes, it's a penalty," he told BBC Match of the Day. "It hits his hand in the box.

"Any frustration I have is [because] we had a penalty given against us in our last game, which was handball. When you come here you need as much going for you as you can get. Definitely a penalty for me."