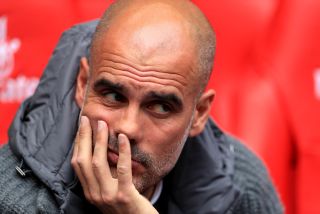 Pep Guardiola did not appreciate being asked for his thoughts on UEFA’s Financial Fair Play (FFP) investigation after Manchester City completed an historic domestic treble.

City steamrollered Watford 6-0 to lift the FA Cup at Wembley, completing an unprecedented domestic trio of titles in style.

But when asked if he has ever received payments from Manchester City’s owners for services other than his managerial role, Guardiola vented his frustrations.

He said: “Do you know the question you’re asking me, if I ever received money for another situation, right now, today?

“Honestly, do you think I deserve to have this type of question happen, on the day we won the treble, if I received money from other situations?

“Are you accusing me? Oh man.”

Talking generally on the FFP investigation into City, Guardiola added: “Well I said yesterday we are not guilty.

“I listen to my chairman, my CEO, they give me arguments, and I trust them.

“When they tell me we did absolutely follow the rules, I’m sorry, I believe them.”