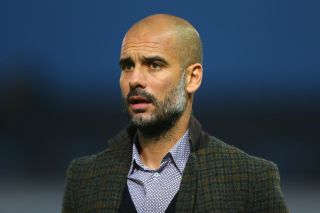 The Bundesliga champions meet Borussia Monchengladbach in Sunday's top-of-the-table clash, before a DFB-Pokal tie with Hamburg next Wednesday ahead of Der Klassiker with rivals Borussia Dortmund on November 1.

Following a tough domestic schedule, Bayern will play a fourth match in the space of 11 days when they welcome Roma to the Allianz Arena on November 5 in the UEFA Champions League.

Bayern head into Sunday's match unbeaten in Germany's top flight and on the back of a stunning 7-1 demolition of Roma at the Stadio Olimpico.

Guardiola is keen to temper expectations at Bayern - who have not lost since their DFL-Supercup defeat to Dortmund in August - but recognises the importance of their upcoming schedule.

"[We need to] stay calm. We are only in October," he said. "These are the most important 10 days before the winter break. We'll see what level we are on.

"Now, the players themselves have to fight to earn a place in the team. They need to show me every day that they are ready to play."

Guardiola was also asked about the form of Mario Gotze after his goal in the Roma rout followed a brace in last weekend's 6-0 battering of Werder Bremen.

Gotze is the Bundesliga's top scorer this term, with six goals in seven appearances, but Guardiola feels the ex-Dortmund man can still improve.

"I want more," he added. "He has great quality, Bayern Munich want more from Mario. We've talked about it and I know that he is ready for it."