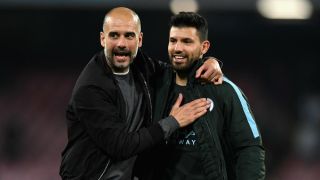 Guardiola has rotated Argentina star Aguero and Brazil striker Jesus for the majority of this season, an approach that has contributed to City opening up a 15-point lead at the top of the Premier League.

It has also been an apparent source of one of the few notes of discord emanating from the Etihad Stadium of late, as reports before Christmas suggested Aguero was unhappy with Guardiola's treatment of him in the wake of being an unused substituted in the 2-1 derby win over Manchester United.

The 29-year-old was also visibly frustrated when withdrawn for Jesus before the hour as Tottenham were swatted aside 4-1.

He should not have to endure such restrictions upon his playing time in the immediate future, with Jesus facing up to two months out on account of the injury he suffered at Crystal Palace last weekend.

"I would prefer Gabriel was here, believe me. For this amount of games we have just one striker in Sergio," Guardiola said ahead of Saturday's FA Cup third-round tie against Burnley.

"Hopefully he can show us his top level that he has. We are going to speak with him every day, before and after the games, to see how he feels because, of course, when you have a game every three or four days, some minutes you have to rest and some games you are going to play. That is natural."

Aguero has striven, often in vain, for his top level since a taxi crash in Amsterdam at the end of September left him with a broken rib, ruling him out of City's pivotal 1-0 win at Chelsea.

He poached a 16th goal of the season against Watford in midweek and told reporters afterwards that he intends to see out his contract at the Etihad Stadium until 2020, adding pointedly that the club will have the final word.

At the start of last season, Guardiola regularly asked for Aguero to improve his all-round contribution to the side but, as has been the case for some time now, he was fulsome in his praise on Friday despite the recent suggestions of choppy waters.

"I think we are so happy with what Sergio has done in our period together," the former Barcelona boss added, while noting the muscular injuries that hindered Aguero during many previous seasons at City appear to be a thing of the past.

"Before we came here he always had long periods injured and in these two years he didn't suffer that.

"He was banned two times [in 2016-17] because he is so aggressive without the ball and then after that it was always good. He was always fit.

"Hopefully we can handle it until the end because we need the strikers' goals. Our success this season is not just the strikers; it is wingers, attacking midfielders and set-pieces - scoring a lot.

"But our striker is our striker. We need Sergio, we need Gabriel. We need them both. Two months is a lot of games when we will just have one."