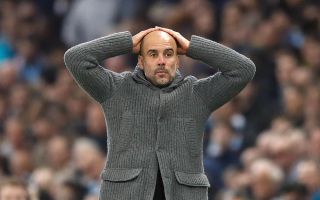 Pep Guardiola will launch another attempt to win the quadruple with Manchester City next season.

City’s bid to win four trophies – a feat never achieved in English football – came to an agonising end as Tottenham edged them out in a thrilling Champions League quarter-final in midweek.

They now switch focus back to the Premier League but their battle for top spot with Liverpool remains tight as they prepare for another critical clash with Spurs at the Etihad Stadium on Saturday.

Liverpool and Spurs may have been helped in their challenges in these competitions by early exits from one or both of the domestic cup competitions.

Yet if that is the case Guardiola, who has guided City to Carabao Cup success and reached the FA Cup final this term, has no intention of easing up on any front next year.

The City boss said: “I don’t understand in my profession saying I don’t want to win. If I lose it’s because the opponent beat me or beat us.

“I’m not going to drop any competitions because maybe in the future it will be better. Who knows what’s going to happen in the future?

“The present is this game and I will try. I will dream next season of fighting for the four titles, that’s my dream.”

Guardiola hopes his team can use their Champions League exit to motivate them in the remainder of the season but he admits he does not yet know how the players will react.

“Before the game you don’t know how you will play,” he said. “You never know how you’ll react.

“But we were out (of the Champions League) other times and we reacted well. Tomorrow I want to see the same from my players – even (when) hurt, in tough moments, that’s why we are professional.

“That is why we live an incredible life in this incredible club. We have to do it again.”

Guardiola has dismissed criticism over his approach in the two legs against Spurs, which ended with Spurs going through on away goals despite a 4-3 loss in Wednesday’s thriller.

Guardiola said: “We have to improve the defensive department in this stage of the competition and be more solid. In general, we want to improve.

“But people make mistakes, they play and make good actions or bad. We have to accept it.

“All season, not just these specific games, I’m proud. I like to see them play like this, I prefer this way. We’re not going to change.

“No team creates the number of chances in Europe that we do. That’s how I like to see my team. I will defend them until the last day but unfortunately we are not in the last stages.”

Raheem Sterling thought he had scored a dramatic late winner on Wednesday only for the strike to be ruled out by VAR.

Guardiola, who has often spoken in favour of VAR, accepted the decision and has no complaints with the concept.

He said: “Just try not to make mistakes with VAR, that is all. VAR is f****** boring, talking about it. Sometimes it helps you, sometimes not.”