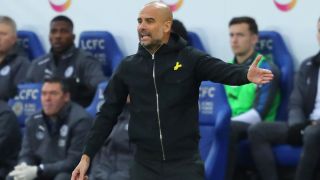 Manchester City manager Pep Guardiola warned his team he would "kill" anyone who got complacent after their flying start to the season.

City continued their Premier League dominance with a 2-0 win at Leicester City on Saturday seeing them maintain their eight-point lead at the top.

The Spaniard said there was no chance of his team becoming complacent despite their stunning form.

"That is not going to happen because I am their manager," Guardiola said.

"The team, that is not going to happen. I'll kill them. Complacency doesn't happen in my teams.

"They can play bad, teams are going to beat us, that happens.

"But if you see the team, they have the desire to have the ball and play. We are not a team that speculates about absolutely anything. That's not going to happen."

City host Feyenoord in the Champions League on Tuesday, having already sealed a spot in the last 16.