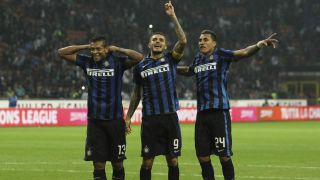 Inter midfielder Fredy Guarin believes his side should consider themselves capable of winning the Serie A title this season.

Roberto Mancini's side are three points clear at the top of the table, having won all five of their opening games, and already have a 10-point gap to reigning champions Juventus.

Guarin is thrilled with Inter's start to the campaign after their inconsistent form over recent seasons and says there should be a growing belief in their chances of ending Juve's Scudetto dominance.

"What's great about football is that things change so quickly," the Colombia international told reporters at the launch of his website, FredyGuarin.com.

"After three years of not finding the right way forward, there were positive changes. I had difficulty during that period, but I think I gained in experience and today we have a great opportunity with this team, this coach and these new players to lift our heads and think about winning the Scudetto.

"To be considered a great team, you have to earn it one match at a time. Mentality is very important, as is making sure we fix our mistakes. What really counts is to be a solid squad, to leave no room for doubt."

Inter have been criticised by some for the level of their performances so far, with Mancini's side having won four of their five matches 1-0, but Guarin says such talk only spurs them on.

"What do I say to critics? Nothing," he added. "The pitch does the talking, as far as we're concerned they're motivating us to do better."

Guarin came close to joining Juventus in January 2014, though the move failed to materialise, but the 29-year-old insists he is happy to remain at San Siro.

"In reality I never felt distant from Inter," he added. "The club let me know I was part of their plans and I said from day one that I'm prouder to be part of Inter than any other team I've played for.

"Would I like to end my career at Inter? You never know what might happen, but I hope to win things with them now."