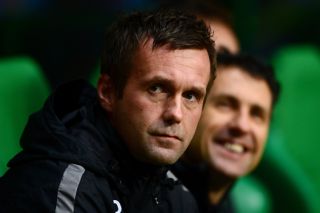 Guidetti has shone on loan at Celtic this season, scoring eight goals in as many games in all competitions, including a hat-trick in a 6-0 thrashing of Partick Thistle in the Scottish League Cup on Wednesday.

Celtic boss Deila conceded money will play a part in any permanent deal with Guidetti - who is on the books of Manchester City - but the 39-year-old manager reckons the Swedish striker would regret leaving Parkhead for a middle of the road club in England's top flight.

"Celtic, if you take away the money, is still one of the biggest clubs in the world," Deila said.

"If you come here you have everything. You have stadium, supporters, fantastic pitches, good staff, history, and you have European football.

"Here you have what you need to get to your potential."

That last word is one that has followed Guidetti since he first signed for City in 2008 as a 16-year-old but has rarely turned into on-field results with the Stockholm-born forward having barely played in England.

Deila reckons that on-field success could convince Guidetti to stay in Glasgow when his contract with City expires at the end of the season.

"It's important that he is performing well here and that he feels loved and wanted. To play at Celtic when that happens, you can't be in a better place," the Norwegian manager said.

"I've said to John that he needs stability to play.

"He is a very good football player and he has started very well for us. He has a lot of potential and he still has a long way to go.

"I think he sees that he is performing well now because the team are performing too. Those things are important when young players are picking the next stage of their career and the next club."

But Deila concedes Celtic will have to offer Guidetti the best contract they can with the Swede likely to take a serious pay cut if he stays at Parkhead.

"Money is always a key factor," he said.

"We will see what happens but everyone has to know we really want John to stay.

"I've talked with him and he loves being here. He loves the club and we need to do everything we can now to make his move a permanent one."