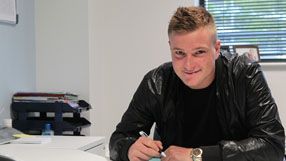 Guidetti is yet to make his debut for the Blues after a mystery virus ruled him out of City’s pre-season. It has been six months since his last competitive outing, but the 20-year-old insisted that he is now ready to battle it out for Roberto Mancini's side.

"It’s going to be competitive with the players we have here, but who doesn’t like being competitive? If everything was easy then it wouldn’t be fun. I know I’m going to learn so much from all the great strikers that are here.

"I want to develop and become the best that I can. I want to start to play more regularly for City and get first-team football every week and just to play in front of the fans here and to bring home some medals – that would be a dream for me, to start playing for Manchester City."