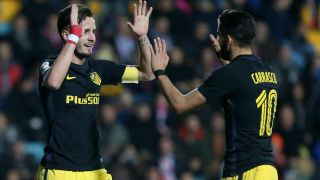 Yannick Carrasco proved key for a much-changed Atletico Madrid side as he scored a double in a 6-0 hammering of third-tier Guijuelo in the first leg of their Copa del Rey round of 32 clash on Wednesday.

Diego Simeone rested a host of his regulars, including the likes of Antoine Griezmann and Diego Godin, but the changes had little impact on Atletico's ability to get the job done, as Carrasco played a starring role in attack.

Before getting on the scoresheet himself, Carrasco won the debatable penalty that opened the door for Saul Niguez to break the deadlock.

Sime Vrsaljko produced a smart volleyed finish just before the break to double their advantage, while Carrasco had a decisive impact inside the area early in the second half.

The 23-year-old then took his tally for the season to 10 with a tap-in and Angel Correa added the fifth with a similarly straightforward finish 23 minutes from the end.

Youngster Roberto Nunez wrapped things up towards the end, and Guijuelo now face a daunting trip to the Vicente Calderon for the second leg on December 20.

Atletico unsurprisingly exerted control right from the start as their superior quality shone through, but they wasted several opportunities in the first 20 minutes.

The visitors did eventually take the lead just before the half-hour mark, although there was more than a hint of controversy about their opener.

Carrasco darted into the left side of the area and, seeing Hector Martinez sliding in, he jumped over the incoming tackle and fell to the floor with minimal contact, before Saul slammed home the resulting penalty.

The Belgian was a central figure again a few moments later, prodding against the post after being released by Correa before then seeing Enrique Royo palm another effort over just before the break.

Royo should have done better on the stroke of half-time, though, as Vrsaljko met Thomas Partey's lofted pass in the area and beat the goalkeeper at his near post with a volley.

Atletico wasted no time in putting the tie completely beyond the hosts in the second half, as Carrasco got his first within four minutes of the restart, stabbing home after being released by Correa.

And their fifth was not too dissimilar – Correa left with an easy finish thanks to Lucas Hernandez's pass across the face of goal in the 57th minute.

Carrasco's 59th-minute replacement Nunez completed the scoring with five minutes to go, providing a cool finish from 10 yards after Vrsaljko's cross dropped kindly for him.