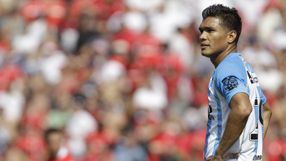 "Teo will no longer be part of the professional squad," club president Gaston Cogorno told reporters.

Trainer Alfio Basile, who has had two spells as Argentina coach, resigned after the derby defeat which left Racing five from bottom of the Clausura championship with nine points from 10 games. They are 11 points behind joint leaders Boca Juniors and Newell's Old Boys.

Local media reported fighting in the Racing changing room at Independiente as team mates turned on Gutierrez after a senseless red card for insulting the referee left them with nine men for the final 21 minutes on Saturday. The striker then allegedly threatened them with a paintball gun.

"We will seek a mutual way out but [Gutierrez] won't play for Racing again," Cogorno said of the 26-year-old who has been sent off four times since joining the club from Trabzonspor of Turkey in February 2011.

"I haven't talked to Teo but I did with his agent and the investment group that brought him [to Racing] to explain to them why he won't play [for the club] any more.

"People are tired of Teo's attitude," he added of the striker.

Gutierrez irritated team-mates last year by returning late from international duty with Colombia. He was still put in the starting line-up by then coach Diego Simeone for that weekend's key match at Boca Juniors only to get himself sent off for pushing the referee for not awarding him a penalty.

The talented striker was joint top scorer of last year's Clausura, second of two 19-match championships in the Argentine season, with 11 goals. He has only netted nine this season, six in the Apertura and three in the Clausura.

Racing have appointed 31-year-old Luis Zubeldia, who has impressed at Lanus and Ecuador's Barcelona in his short coaching career, as Basile's replacement.

"I feel privileged. It's what all coaches want, to train a big club," Zubeldia told Racing TV. Seven-times league champions Racing are one of Argentina's so-called Big Five.

At his presentation news conference, Zubeldia refused to be drawn on Gutierrez.