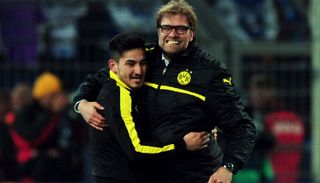 "Next season I will definitely be playing at Dortmund. We will have to see what happens after that," the Germany international, whose contract runs out in 2015, told kicker magazine on Monday.

The talented 22-year-old midfielder, who joined in 2011 to replace Nuri Sahin, has since won the domestic double in 2012, played in this year's Champions League final and become a regular for Germany.

He still hopes to get a shot at the Champions League trophy next season after coming agonisingly close but losing 2-1 to Bayern Munich in May's final following a late winner.

"My big dream is still alive," said Gündogan, who has Turkish roots and scored Dortmund's spot-kick in the final. "We have tasted blood and the potential is there for the big leap."

He said Dortmund would remain competitive even if top striker Robert Lewandowski leaves, as midfielder Mario Götze has done to join Bayern.

"We have shown in the past that we can compensate as a team if key players leave," he said.