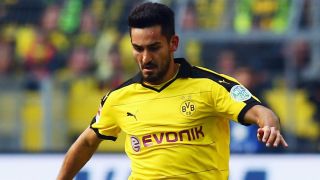 Borussia Dortmund midfielder Ilkay Gundogan insists he has not made a decision on his future as he considers his options.

Gundogan's contract expires in June 2017 and the Germany international has been linked with Italian champions Juventus and Manchester City, who are reportedly planning for life with departing Bayern Munich boss Pep Guardiola.

The 25-year-old is no stranger to speculation, having resisted temptation to move to the Premier League as he signed a new two-year contract in 2015.

But Gundogan has offered no assurances about his future beyond next season, telling Bild: "There is still no decision, and of course, everything has to be considered very carefully, because your career is limited in time.

"But to be honest, everything is still open.

"I know what I have at my club, and I'm not going to lose sight of. But again, a decision is definitely not made."

Gundogan has scored two goals in all competitions this season as Dortmund sit second in the Bundesliga, while they are also preparing for the Europa League last 32.