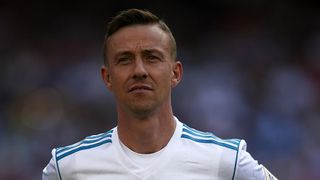 Guti is set to be appointed as the new head coach at Real Madrid, according to Real Murcia president Victor Galvez.

The LaLiga giants are seeking a replacement for Zinedine Zidane, who announced his shock resignation less than a week after leading Madrid to an unprecedented third consecutive Champions League title.

Guti is employed as a youth coach at Madrid but had been linked with a surprise switch to Scottish Premiership side St Mirren.

And Galvez confirmed he also hoped to attract Guti to third-tier Murcia, only for Zidane's departure to dramatically change his plan.

"Guti is going to coach Real Madrid, so he cannot coach Murcia," Galvez said. "He was the coach I wanted here.

"It's a shame that Zidane didn't resign two days later. Guti called me to thank me for our interest in him."

Guti - who made over 500 appearances for Madrid as a player - was backed by Frenchman Zidane as a future head coach at the capital club in February.

"Yes, I see him [as being] capable," Zidane said. "He is preparing himself to be a coach in the future and it could be at Real Madrid.

"He's in good shape, he's someone who is from this club, he's always been here and one day it will be his dream as well."