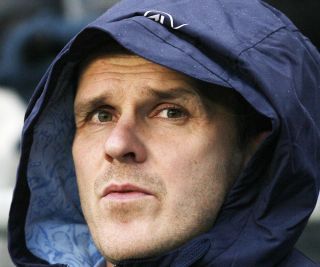 Bayern romped to the title in Pep Guardiola's first campaign at the helm, eventually finishing 19 points clear of second-placed Dortmund.

Victory in the DFB Pokal final - also over Jurgen Klopp's side - completed the domestic double for Bayern, only tinged by the disappointment of being soundly thumped in the UEFA Champions League semi-finals by Real Madrid.

With Dortmund's top scorer Robert Lewandowski leaving Signal Iduna Park to join Guardiola's men, Hamann does not want to see a repeat of the gulf created between the two sides last season.

Klopp's men beat Bayern 2-0 to retain the DFL Supercup earlier this month and former Germany midfielder Hamann believes they can pose more of a threat to the Bavarian giants in the 2014/15 campaign.

"For the neutrals, I hope that Borussia Dortmund can be more dangerous for Bayern than in recent years," he said. "Because Bayern were very dominant and won the championship very early.

"Hopefully it will be more exciting this year. Despite the departure of Robert Lewandowski, Borussia Dortmund have a squad with two players for each position.

"With Lewandowski, Borussia Dortmund would be even better. For me he is the best striker in Europe. Of course, this is a great loss.

"But with [Adrian] Ramos and [Ciro] Immobile - they signed two players who can replace him. They must now show that they can follow in his footsteps. Maybe not with the class of Lewandowski but you never know.

"Klopp has improved many players and has formed a good team. There are many players who go to Dortmund and push out of their borders. Maybe these two could do the same.

"I believe that the team is well-balanced. [Sven] Bender is back. And if [Ilkay] Gundogan can come again and again takes the form of before his injury, then Borussia Dortmund can annoy Bayern Munich."