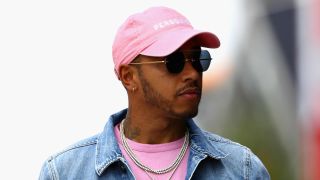 Lewis Hamilton wants to head to Russia to support England in the World Cup final.

England take on Sweden in Samara on Saturday for a place in the semi-finals, where either Croatia or hosts Russia await.

Hamilton is busy preparing for Sunday's British Grand Prix at Silverstone but he is already planning ahead should the Three Lions progress.

The world champion - who was at school with England international Ashley Young - is seeking a record sixth victory in his home race but has one eye on events in Russia.

"We always come into this grand prix with some kind of epic sport around it like Wimbledon or whatever," Hamilton told a news conference. "I want to be watching the game [on Saturday], I had to watch on my phone the other day.

"I can only imagine the boys out there are on a high and they continue. I hope they're sleeping and eating well, it's a large part of it, then go out and enjoy themselves.

"So much pressure at a World Cup but there is so much support for them. Excited fans, so much passion for sport, you experience it here and at stadiums for football and even myself.

"Watching the other day, I don't watch enough football and I watched as a kid and collected stickers and everything. I remember playing with Ashley at school. I was watching on the edge of my seat, the passion is crazy, it's like it's in your DNA it's so exciting.

"I booked my day off, it's next Sunday and I kept it free as I want to be in Russia for that day supporting them."

Following a his retirement from the Austrian Grand Prix, Hamilton heads into Sunday's race a point behind title rival Sebastian Vettel.

He is hoping home advantage will give him the edge over the German.

"Same as every year - the British Grand Prix is the most special," Hamilton said. "It's a real privilege, I'm watching some replays of last year. It's always a great feeling and the fans are incredible, the weather is the best it's ever been, the World Cup, it's a great time for sport.

"It would be great to take the lead in general no matter where. Coming into this weekend there's talk of historic wins and these things, it's been an incredible journey since 2007 coming here and to be riding this positive wave, I'm very grateful to be fighting for a win here for the sixth time.

"Not many drivers get to do that and I'm very privileged. The support is like nowhere else. If we had a Dutch Grand Prix it might get close but the atmosphere is incredible here especially when the weather is good. The hope is we deliver and that's what we're going to try and do.

"[Support] has continued to grow and I think as the years go on you appreciate it more and more: 2010 was pretty cool, 2008, I'll never forget that day. It's been growing ever since really, I hope it continues. I'm not going to be here forever but I hope to be sat here for a little bit longer."