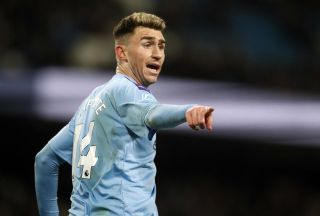 Manchester City defender Aymeric Laporte could be out of action for up to a month with a hamstring injury, manager Pep Guardiola has confirmed.

Laporte was forced off in the first half of Wednesday’s Champions League victory at Real Madrid.

It was just his eighth appearance of an injury-ravaged season.

Guardiola saya Laporte likely to be out three weeks to a month with a hamstring injury #MCFCpic.twitter.com/p5xeO8eeae— Andy Hampson (@andyhampson) February 28, 2020

Guardiola said: “He has a hamstring injury, so that is normally three weeks or one month, more or less.

“We tried to avoid it but unfortunately it has happened after four or five months out and then going directly into a big game. It sometimes happens.”

Laporte suffered a hamstring injury in August and then suffered a setback on his return in January, keeping out for a further month.

Sad to leave the team a bit early but most important is the result tonight !! Proud of the boys 💙 #CitySpirit 🔥 pic.twitter.com/z0p05e1tVW— Aymeric Laporte (@Laporte) February 27, 2020

The clash at the Bernabeu was just the third game of his latest comeback.

The Frenchman has been sorely missed throughout a season in which City have failed to mount a strong defence of their Premier League title.

The latest could hamper their quest for silverware on other fronts. He will miss this weekend’s Carabao Cup final against Aston Villa and is unlikely to be back for the second leg against Real in three weeks’ time.

He will also miss an FA Cup tie at Sheffield Wednesday and a derby against Manchester United at Old Trafford.

Guardiola said: “It is tough but they have to overcome these situations. Life is not easy and always in the world the people who survive overcome the bad moments.

“The guys who don’t play are guys who say they can’t face it, ‘the world is against me’. Injuries are the same.

“If you think, ‘I am an unlucky guy’, you will not improve. It is what it is. Accept it and work harder to come back in the best condition as possible.”