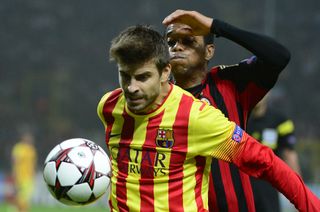 The Spain defender, who played the entirety of the UEFA Champions League Group H clash at San Siro on Tuesday, felt discomfort in his left leg towards the end of the match and has since undergone tests to diagnose the problem.

He could now be a doubt for this weekend's El Clasico, with Barcelona confirming on their official website that he will now "follow a specific workout regime on Thursday and Friday".

In a double blow for Barcelona, the club also confirmed that Jonathan dos Santos also suffered an injury to the anterior cruciate ligament in his right knee during training on Wednesday.

It is not yet clear how long the Mexican midfielder will be sidelined, but the issue is being monitored by the club's medical staff and is set to be the subject of tests in the coming days.

Dos Santos has made just three league appearances for the Camp Nou side this season.