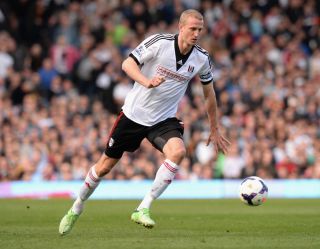 Fulham looked on course for a huge boost after going 2-0 ahead against Hull City at Craven Cottage on Saturday, only to let that lead slip as Felix Magath's men were forced to settle for a 2-2 draw.

The result leaves Fulham in 19th, one point adrift of safety with games at Stoke City and home to Crystal Palace still to come.

And captain Hangeland has urged his team-mates to quickly shrug off the Hull disappointment, and emulate the 2008 campaign when Fulham won three of their last four fixtures to pull off a great escape.

"The next two weeks that will decide whether we're in the Premier League or not. There's no time for feeling sorry for ourselves," he is quoted as saying by The Daily Star.

"We've made a lot of mistakes this season and now is the time to really show what we're made of and go and win the next two weeks.

"We have 31 points and we need six points from the next two to stay up, probably, and that has to be our target.

"I've (done) it once before six years ago and back then it was a good story and hopefully we can repeat it. It's been a long time since that. There are many differences but it's still the same club.

"I remember back then there was a good mentality and a strong mentality when we needed it most.

"That's what we need now. You need to play your game even if you are under a lot of pressure."