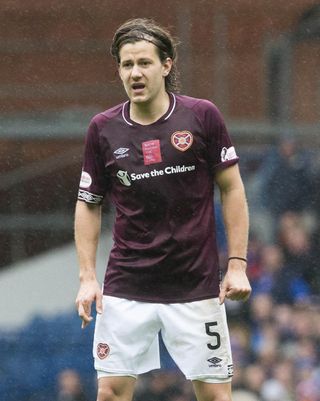 Hearts midfielder Peter Haring was happy to extend his contract after his move to Scotland went better than he could have imagined.

Haring was just less than halfway through a two-year deal but has now signed until the summer of 2022.

The 25-year-old quickly became a favourite of Hearts boss Craig Levein after joining from SV Ried in the Austrian second tier and has scored seven goals in 36 appearances, despite undergoing hernia surgery midway through the campaign.

Haring told Hearts TV: “When I signed here, or before I signed here, I spoke to the gaffer and Austin (MacPhee, assistant manager) and it was clear they planned to play me as a centre-back.

“Pretty soon they moved me one step forward into central midfield and a position I’ve played a lot when I was young, and I position I really enjoy to play.

“I was quite happy with that and happy that I could perform that well over the last season.

“I’m happy with my goals, obviously, as well. I think it’s hard to plan things in football, it always comes a little bit different than what you expect.

“I felt quite at home pretty quick. Everything seems to suit me quite well. I’m just enjoying playing here, enjoying the stadium, enjoying the city, I’m enjoying the club as well. That’s why I’m happy to sign a long-term contract.”

Haring is close to fitness following a groin problem but will miss Saturday’s visit of Kilmarnock.

The Austrian’s absence could mean another start for Harry Cochrane, who graduated to the first-team dressing room this week after making his 30th appearance in last weekend’s 1-1 draw with Hibernian.

The 18-year-old enjoyed a meteoric rise last term, netting in a 4-0 win over Celtic which ended the Hoops’ long unbeaten domestic run under Brendan Rodgers.

But he has only played six times this season after being hit by five separate injuries.

He said: “The first day I came in from training my shoes were tied up so it wasn’t a great start, but there’s probably more to come.

“It’s obviously good for me, I feel more like a first-team player now but I’ll still help the boys out if they need a hand with jobs.

“At the start of the season the gaffer brought in quality players so I knew it was going to be a challenge, I was told the second year is the hardest year. Obviously it’s been tough but it’s not been helped by injuries.

“I’m just looking to make as big an impact as possible for the team and hopefully play every game for the rest of the season.”