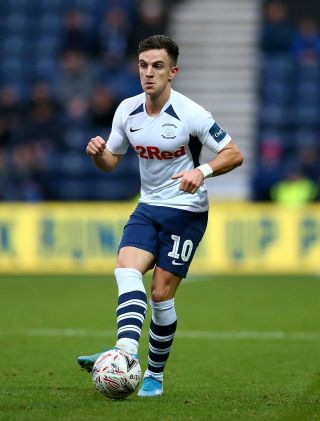 North End had chances to widen the margin as Lee Bowyer’s struggling Addicks failed to seriously threaten an equaliser.

Preston had taken just nine points from their previous 11 Championship matches to slip from second to 10th.

And Charlton increased the tension at Deepdale by taking the lead after just five minutes.

Alfie Doughty picked up the ball in acres of space down the left wing and his low cross set up Green – who played just six games on loan at Preston from Aston Villa in the first half of the season – to tap in from four yards.

Preston were sluggish and wasteful on the ball, to the audible frustration of the home crowd, but began to show signs of life as Harrop had a shot saved and Daniel Johnson curled just over.

Harrop was by far the brightest spark for the hosts and it was the former Manchester United youngster who equalised after 31 minutes.

Fresh from a stunning volley at Blackburn last weekend, the 24-year-old exchanged passes with Darnell Fisher before curling a superb left-footed strike into the top corner from the edge of the box.

That sparked Preston into life as Scott Sinclair, on his home debut after signing from Celtic, drove through the defence but fired straight at goalkeeper Dillon Phillips.

And Alex Neil’s side took the lead seven minutes after the break through former Charlton defender Bauer.

The German, who spent four years with the Addicks before joining Preston in the summer, was allowed a free jump from Harrop’s corner and powered a header low past Phillips from eight yards.

Preston ramped up the pressure as they tried to put the game to bed. Tom Barkhuizen’s effort from 25 yards was straight at Phillips before Maguire put a header well over.

Sinclair had shown flashes of quality and his best chance came after 67 minutes when he ran from his own area but blazed over from 18 yards.

Charlton, who have now won just one of their last 16 league matches, were limited to half chances in their pursuit of an equaliser.

Doughty failed to connect with a volley from 10 yards and Darren Pratley headed over at the far post from a stoppage-time corner as Preston sealed an important home win.