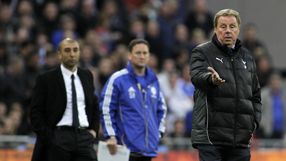 Chelsea's 1-0 first-leg victory over the European champions on Wednesday put the London club in sight of a Champions League final against either Real Madrid or Bayern Munich.

Should Chelsea hold off the expected Barca onslaught next week and then go on to lift the trophy for the first time in next month, they would qualify for next season's tournament even if they fail to finish in the Premier League top four.

In that scenario the team that finishes fourth, the position Tottenham find themselves in with five games remaining, would be deprived of a place in the Champions League qualifying round.

"I will be rooting for Chelsea on Tuesday. I have not even thought about the consequences for Tottenham if they win it," Redknapp told reporters on Friday as he prepared for Saturday's London derby at Queens Park Rangers.

"From our point of view if Chelsea stay in it and have a Champions League final as well coming up, they have a lot on their plate then. I want to see an English team win, I want to see them beat Barcelona. Why not?

"I think they can beat them. They were fortunate the other night. They defended for their lives and rode their luck, Barcelona hit the post and whatever.

"But I said before the game it was one they can win. 1-0 is a fantastic first-leg result. Barcelona are the best team in the world, but at the moment Chelsea are in the driving seat."

Redknapp's biggest concern is arresting a terrible slide in form for his Spurs side, who have managed only one win in eight Premier League games - a sequence that ended their title hopes and saw Arsenal overtake them in the race for third spot.

Arsenal host sixth-placed Chelsea on Saturday before Tottenham, who are five points behind their North London rivals, travel to relegation-threatened QPR.

Tottenham must quickly recover from the disappointment of a 5-1 drubbing by Chelsea in the FA Cup semi-final last Sunday.

"We were all very low last Sunday, myself included but we have to pick ourselves up. There is still a lot to play for," said Redknapp, still favourite to lead England at Euro 2012.

"Third place is still possible. Chelsea have a big game at Arsenal tomorrow, so there will be twists and turns till the end of the season."

Tottenham are without injured defender Younes Kaboul on Saturday while Niko Kranjcar is out of the rest of the season with a knee injury.