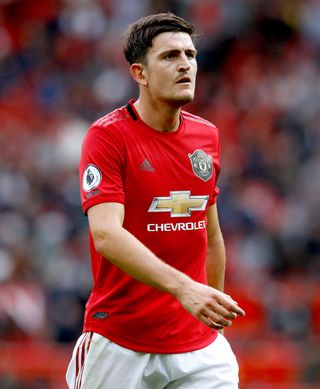 Harry Maguire’s frustration at another winless match was palpable as the Manchester United defender called for more confidence and arrogance on the ball.

St Mary’s witnessed United’s eighth successive winless away match as Daniel James’ stunning strike during a bright start was cancelled out by Southampton defender Jan Vestergaard in a 1-1 draw.

Gutted not to get the 3 points yesterday. Another great strike by @Daniel_James_97 🚀 #MUFCpic.twitter.com/h3kTleI6aO— Harry Maguire (@HarryMaguire93) September 1, 2019

“Another game where we’ve deserved to win,” he said. “We’ve created the majority of the chances and we’ve dropped two points, really.

“The start of our season has been a little bit like that. We deserved to win at Wolves and then we conceded two shots against Palace and they scored two.

“They’ve not really had a chance apart from obviously the one building up to the goal and then the header as well so it’s another set-play, the same as Wolves.

“I feel like we’ve been really fairly solid defensively, but the fine margins are the set-plays and things are punishing us at the moment and we’re not being clinical at the other end.”

Watch the key action from today's game at Southampton, including another fine finish from @Daniel_James_97 🎥 #MUFC#SOUMUNpic.twitter.com/rn9Cs87QVH— Manchester United (@ManUtd) August 31, 2019

Put to Maguire that it appeared the cutting edge was all that had cost United recently, the centre-back said: “Yeah, definitely. We’re playing attacking football.

“Don’t get me wrong, I think we can definitely improve a lot, especially on the ball.

“I think you’ve seen again today. We gave the ball away far too much, especially towards the end of the first and start of the second half.

“We were giving it away sloppy, and we need to improve on that and show arrogance on the ball and be confident on the ball.

“We’re Man United and we want to control games and I feel like in the last 20 of the first and the first 20 of the second we didn’t really control the game and I think we got punished for that really.

“Probably 15 minutes either side of half-time they’ve had the better of the play and they’ve come away with a point.”

Maguire speaks like a United player and clearly wants to drive the club back to a level they were synonymous with for so long.

That ambition and expectation explains why this draw sticks in the craw, with even Kevin Danso’s second-half sending-off not even providing the platform for the visitors to triumph.

“Yeah, well, that’s how we should play all the way through the game,” Maguire said of the response to the dismissal. “You’ve seen the confidence of the players when they went down to 10 men.

“They seemed like they wanted the ball, everyone wanted to create a chance and we did enough in that 15 minutes to score a goal.

“We’ve got to be more clinical. We had numerous crosses, numerous balls across the box, we need someone to just put their head in where it hurts and go and get the three points.

“But, listen, sometimes you get them, sometimes you don’t, and we feel like we’ve been a bit unlucky in the first few games of the season and our performances have warranted more points.

“But it will come. We’ll keep working hard, keep improving – like I said we need to improve -and hopefully we’ll be fine for the next game.”