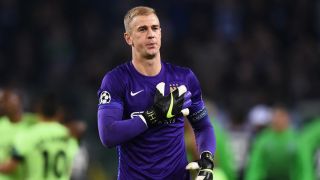 Guardiola has announced he will leave Bundesliga champions Bayern Munich when his contract expires at the end of this season and the former Barcelona coach has expressed his desire to work in the Premier League.

The Etihad Stadium is viewed as the most likely destination for the 45-year-old, with former Barcelona board members Txiki Begiristain and Ferran Soriano tipped to exert a measure of influence in their respective current positions of director of football and chief executive at City respectively.

The upshot for current manager Manuel Pellegrini has been a steady stream of questions regarding his future at pre-match media briefings, as City vie for trophies on four fronts this season.

Hart believes this measure of uncertainty comes with the territory of playing for a club in the hunt for honours.

"It's unavoidable, we all see it, we're not stupid," he told CNN.

"At the same time we accept that you hear stuff that is so totally not true every day about each other or other people or people you know, so, there's a lot of stuff around football, that's why it's such a successful sport and such a big business.

"All of us are in the mindset that stuff goes on around us but our goal is to win things and be involved in the moment."

Pellegrini led City to Premier League and League Cup glory in 2013-14 and will attempt to mastermind a semi-final turnaround in the latter competition when his side host Everton on Wednesday nursing a 2-1 first-leg deficit.

Hart, who is set to sit out the Everton match as understudy Willy Caballero resumes his goalkeeping duties for domestic cup ties, credited his manager for having a straightforward and measured approach.

"He's very straight down the middle," he said. "He's always said if we don't play well as a team over certain period of time, we'll be moved on, he'll be moved on.

"That's Manchester City, that's how it works, that's the club we're at. I can't talk for him but he seems to live in the moment.

"He's constantly in contact with the people who matter and we've got titles to win so that's more important on his mind."