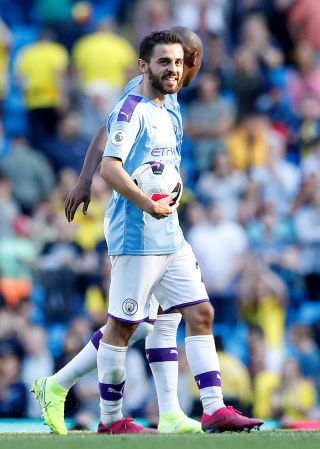 Bernardo Silva claimed Manchester City just wanted to put on a show for their fans as they thrashed Watford 8-0.

The champions were at their ruthless best at the Etihad Stadium on Saturday as they hammered the hapless Hornets by the joint second-biggest scoreline in Premier League history.

It was a stunning response to last weekend’s surprise loss at promoted Norwich and Silva, who netted his first senior hat-trick in the rout, said making amends had been one of the main objectives.

Fantastic perfomance from everyone and the 3 points 🔵🔵 @ManCity So happy for my first hat-trick ⚽️⚽️⚽️ pic.twitter.com/nbgPyjXFYw— Bernardo Silva (@BernardoCSilva) September 21, 2019

“After the defeat at Norwich obviously we wanted to get the three points and give our fans a good performance,” said the Portuguese playmaker.

“We were unbelievable in the first 30 minutes, scored lots of goals and had control. After the Norwich defeat, it was great to give our fans the result and the performance.

“We aimed to keep it going in the second half. We didn’t want them to hurt us or score past us.”

The omens had been bad for Watford before kick-off. The visitors travelled north having registered just two points this season and already in the care of their second manager of the campaign.

.@BernardoCSilva 💬 I'm going to get all the players to sign my ball and then I'll take it home to Portugal and keep it in a special place!— Manchester City (@ManCity) September 21, 2019

They had also lost their previous 11 games against City, conceding 38 goals in the process, including last season’s 6-0 drubbing in the FA Cup final.

The tone was set as David Silva opened the scoring after just 52 seconds and four more goals followed inside the opening 18 minutes – the quickest any Premier League side has opened up a 5-0 lead.

Sergio Aguero scored the second – his 100th Premier League goal at the Etihad – from a penalty before Riyad Mahrez added a deflected free-kick and Bernardo Silva and Nicolas Otamendi also struck.

Bernardo Silva completed his treble after the break and Kevin De Bruyne wrapped up the scoring with a powerful strike. That meant City – who also hit the woodwork twice among 28 attempts on goal – stopped just one short of equalling Manchester United’s record 9-0 defeat of Ipswich in 1995.

“I think we let ourselves and the fans down,” said Watford goalkeeper Ben Foster.

“The fans were giving it everything, all they’ve got, unfortunately we on the pitch didn’t give it all we have got.

“As a keeper coming to City and Liverpool, if you let five in in 20 minutes you fear the worst, you think cricket scores. They are without doubt the best team I have ever played against.

“We were poor, didn’t lay a glove on them, but at times it was breathtaking watching them.”