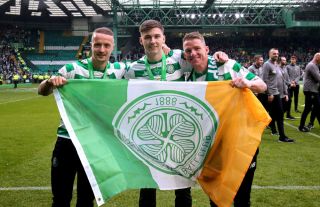 Celtic winger Jonny Hayes insists he will never take the chance to win trophies for granted after suffering as a supporter in his younger days.

The 31-year-old Irishman and his Celtic team-mates are on the brink of making new history by completing a ‘triple treble’.

Hearts stand in the way of Celtic claiming a ninth consecutive domestic trophy in Saturday’s William Hill Scottish Cup final and Hayes is determined to go one better than the unprecedented back-to-back treble.

Hayes told the club’s website: “Being able to compete for a ninth league title is remarkable, especially when you consider the competitiveness of modern football.

“There was, of course, a long spell in the 1990s when Celtic were less successful – but now there’s dominance on our side. You can never take any of it for granted.

“I’ve seen the league when our rivals were winning titles, and while it’s the flip-side now, there are a lot of people out there who won’t remember the bad times. That’s why standards nowadays are so high. People almost expect trophies, they expect dominance.

“We really enjoyed trophy day at the weekend, and we now turn our full attention to another game against Hearts, this time at Hampden. We know we’re up against a very good side, but we want to win and ensure we go down in history.”