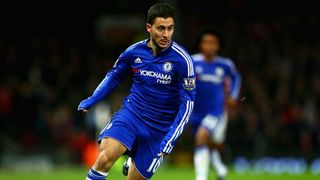 Guus Hiddink has confirmed Eden Hazard and Diego Costa have been passed fit for Chelsea's Premier League clash with Arsenal.

Belgium playmaker Hazard has not featured for Chelsea since their 3-0 victory over Crystal Palace on January 3 because of a groin injury.

Prior to last weekend's 3-3 draw with Everton, Hiddink confirmed Hazard could feature in this Sunday's meeting at Emirates Stadium.

But the Dutchman doubts whether Hazard will be able to last the full game.

"He [Hazard] was in the team, well prepared until two days ago by the physios and then he started participating in the team," Hiddink said.

"In the last two days he was in full training. He's available.

"We have to be careful as he's fallen into injuries recently. I'm not sure whether he can play a full 90 minutes."

Arsenal manager Arsene Wenger has warned his players to expect a "fight" from Costa - who is available despite having struggled with a bruised tibia - but Hiddink has no concerns about the Spain international's conduct.

Hiddink added: "The players themselves must bring the quality. You can help out a bit and express the ideas and the way you think to get the best out of the players.

"He's working hard, having good treatment, I don't have any complaints about his discipline."