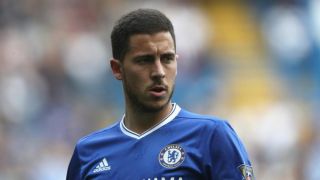 Pedro feels Chelsea team-mate Eden Hazard still has the potential to match Lionel Messi as one of the best players in the world.

The Belgium international endured a difficult 2015-16 campaign after shining the previous season, but Pedro believes the winger has the quality to reach the same level as the Barcelona star.

"When it comes to Messi, we are talking about a player I believe is still the best in the world. He really is on a different level to other players," Pedro told Standard Sport.

"But Hazard is a very, very good player, you can see his technique is excellent and he has shown everything at Chelsea. He is still young, so he is going to continue improving to one day be among the very best in the world.

"It's always going to be difficult to compete with a player of Lionel’s ability, but Eden has all the qualities to do exactly that.

"He has that ability and talent to stand out from the crowd, to make the difference and be decisive. When you see him produce moments of magic, it is easy to draw comparisons with Messi.

"Everyone should be patient and forget what happened to him last season. The whole team struggled, not just Eden. You just need to look in the past and see everything he's achieved for Chelsea and look forward to him doing it again in the future."

Some have suggested Hazard was struggling to cope with the pressure of being Chelsea's main man last term, but Pedro is adamant there is no truth in such suggestions.

"If you are a big player you will always have a lot of pressure on you. It's the same for Eden, just as it is for Messi, Neymar and Cristiano Ronaldo," he added.

"Obviously Eden has that pressure, but he responds to it well and he has proved that in the past. He has played well for Chelsea and his team-mates for many years and always shown that he can take on that responsibility."