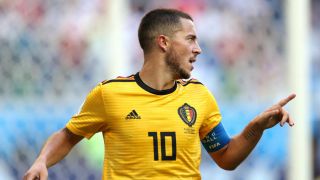 Eden Hazard put speculation surrounding his club future to one side to lead Belgium's World Cup celebrations in Brussels on Sunday.

Hazard played a key role as the Red Devils secured third place in Russia 24 hours earlier, scoring a clinching second goal in their 2-0 play-off defeat of England in St Petersburg.

After that game the Chelsea forward suggested his days at Stamford Bridge could be numbered, claiming it "might be time to discover something different" and telling journalists "you know my preferred destination" - a possible nod in the direction of Real Madrid.

All that was put to one side, however, as Hazard and his Belgium team-mates enjoyed the adoration of tens of thousands of Belgians who had congregated in the centre of the nation's capital to welcome their heroes home.