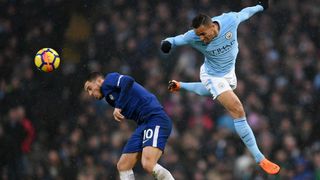 Eden Hazard has criticised Chelsea's approach in Sunday's 1-0 defeat at Manchester City on Sunday – claiming he could have played for "three hours" without touching the ball.

Hazard was deployed as a false nine but toiled on the periphery of a contest in which Bernardo Silva's goal in the first minute of the second half barely illustrated City's total dominance.

Pep Guardiola's side completed 902 passes – the most recorded since such data has been collected for Premier League matches – and enjoyed 71.2 per cent possession, while Chelsea failed to muster an attempt on target.

Hazard did not produce a shot of any description and failed entirely to acknowledge boss Antonio Conte on the touchline when he trudged off to be replaced by Alvaro Morata in the final minute.

"When you leave the pitch you have the impression that you've ran [a lot], but that you haven't played a game of football," he told HLN.

"That's a pity. We could have played on for three hours, and I [still] wouldn't touch a ball.

"It went a bit better only at the end - in the last 10-15 minutes we had more possession. But we should have tried to do that all game."

902 - Manchester City today completed more passes than any other team has managed in a single Premier League game (since 2003-04). Distributed.March 4, 2018

Conte's struggles to effectively fill the void left by Diego Costa's departure has resulted in Hazard being used on a regular basis at the point of the attack.

The Belgium star could find himself thrust into a similar role next week when the reigning Premier League champions aim to turn a 1-1 aggregate score in the Champions League round-of-16 tie against Barcelona in their favour at Camp Nou.

Nevertheless, as demonstrated by fruitless tussles against City centre-backs Nicolas Otamendi and Aymeric Laporte at the weekend, the diminutive Hazard acknowledged the position does not play to his considerable talents.

"I don't know, when the manager plays me up front, I try to give everything. We haven't played a good game [at City]," he added.

0 - Chelsea have failed to register a single shot in the first half of a Premier League game for the first time since 2003-04 (when we have this data available). Stifled.March 4, 2018

"For me personally it's difficult to play a good game, when you only touch the ball three times.

"I tried to jump [for long balls] but against Otamendi and Laporte it is not easy.

"Against Barcelona we had at least a few chances. In that game we could have scored, here we didn't create any.

"It was complicated. Once we had the ball, we were immediately surrounded by three or four players. We have also wasted some simple passes.

"We are going to work hard to perform better next week."