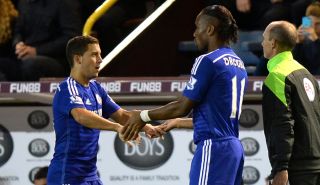 The Belgium star left Lille for the Champions League winners in 2012, but hasn't tasted the sort of success he might have expected following his £32 million move.

Last season was only the third in a decade that Chelsea have finished potless, falling to Atletico Madrid in the Champions League and suffering costly defeats to Aston Villa, Crystal Palace and Sunderland in the Premier League title race.

But Hazard's desire to win trophies with the Londoners burns as bright as ever, and when push comes to shove he wants to be the man to make the difference.

Speaking exclusively in the November 2014 issue of FourFourTwo, available in shops and on iPad now, he says: "I want to be like Didier [Drogba]. I want to do what he did against Bayern Munich [score the equaliser and winning penalty in a Champions League final]. If he can do it, why can't I?

"On a personal level last season was good for me, but I want more. Last season I scored 14 goals in the Premier League - that's not enough."

Their hopes of Premier League glory last term were persistently downplayed by manager Jose Mourinho, but Chelsea have addressed the key areas of the squad which needed strengthening and started 2014/15 in imperious form.

And the Portuguese appears to have made his players acutely aware of how they must improve if they are to lift a first league title since 2010.

"We want to win the league now," he says. "We didn't have the right mentality in some of the games - we lost or drew against teams we should have beaten.

"This season we have learned from our experiences and signed some top players in Diego Costa, Filipe Luis and Cesc Fabregas - and Thibaut Courtois is back with us too. These players can help us win titles at Chelsea."

Read the full interview with Eden Hazard in the November 2014 issue of FourFourTwo, in which he talks about emulating Lionel Messi and Cristiano Ronaldo. The magazine also unearths the truth behind Manchester United’s new No.7, features interviews with Manchester City striker Stevan Jovetic and Barcelona's Gerard Pique, and chats to Seattle Sounders’ Clint Dempsey on the USA captaincy and former Spurs midfielder Darren Anderton on being the poster boy for chronic injury problems. Available now in print and in a specially-designed-for-iPad version.