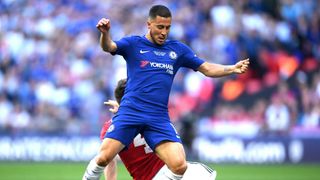 Eden Hazard deflected talk of a possible Chelsea exit as he preferred to soak up the glory of a hard-fought 1-0 FA Cup final win over Manchester United.

The Belgium international scored the only goal from the spot in the 22nd minute to give Antonio Conte his second trophy in English football.

Rumours suggest it could be the cool-headed attacker's last act for the club, with the 27-year-old believed to be considering his options after the Stamford Bridge outfit's largely underwhelming campaign saw them finish fifth in the Premier League.

Hazard shied away from discussing his future as he celebrated a fifth piece of silverware with the Blues.

"Now I'm just happy. To see the fans celebrate the trophy is something we like," Hazard told the BBC.

"We didn't play a great season but we finished well. That's the most important thing."

Chelsea's workmanlike victory will hardly go down as a classic after they were forced to scrap against a United side that struggled to carve out clear opportunities.

Hazard admitted the team will need to evolve if it is to challenge at the top end of the Premier League table next season.

"It was not an easy game. United have a lot of good players," he said.

"We tried to defend well, we kept a clean sheet and we scored one goal.

"It is enough today but if we want to win a lot of games we need to play better because we had to play very defensively."