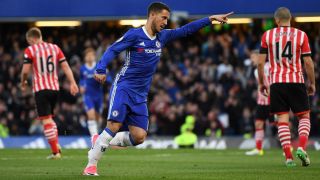 Chelsea star Eden Hazard is unfazed by where he ranks among the world's best, but believes greater leadership can move him closer to Lionel Messi and Cristiano Ronaldo.

Hazard, 26, is widely considered one of the best players in the world, although below two clear standouts in Messi and Ronaldo.

While the Belgium international has little interest in the discussion, he said Barcelona great Messi and Real Madrid star Ronaldo were leaders.

"People are always talking, I don't care about that. I try to be the best I can," Hazard told UK newspapers.

"Players like Ronaldo and Messi are leaders. They are people that want to be better every day. That's why they are at the top for the last 10 years.

"They need to prove – we all need to prove – every day, but I don't think too much about that. I just concentrate on myself, on football, on the pitch, on the training ground. Then I will see."

A two-time Premier League champion, Hazard can add the FA Cup to his collection when Chelsea face Arsenal in Saturday's final.

With John Terry leaving Stamford Bridge at season's end, Hazard said the next generation of Chelsea players had a chance to step up.