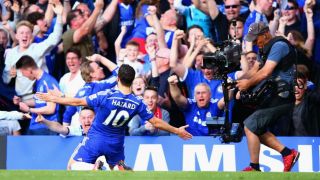 Hazard's 18th goal of the season secured a 1-0 victory over previously in-form Manchester United at Stamford Bridge on Saturday to move Chelsea another giant stride closer to being crowned champions for the first time in five years.

There would appear to be no stopping the London club, who know a positive result against Arsenal next weekend would leave them just one win from the title.

Winger Hazard is taking nothing for granted despite the strong position Chelsea find themselves in.

He told Chelsea TV: "When you win this game it is very important for the rest of the season,

"It is always good to win against Manchester United at Stamford Bridge and we are close to finishing the season and winning the trophy but it has not finished, we have to win two or three more games.

"It is close but it is not finished and when you play in the Premier League it is very difficult, and you never know in football."

He added: "It is always good when you score at Stamford Bridge, and against Man United it is very good when the goal gives three points for the team,

"It is my job. I try to score, I try to make assists and to create something for the team and in this game I did it very well, but we realise it is not finished."