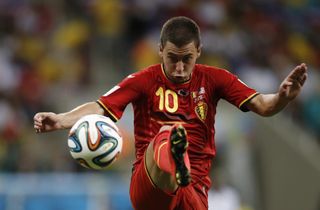 Though not thought to be serious, Hazard will not be risked for Belgium's Euro 2016 qualifier with Andorra on Friday.

Marc Wilmots' side take on the minnows in Brussels as they aim to get their Group B campaign off to a winning start.

Wilmots confirmed Hazard would be left out "as a precaution", and Belgium hope the 23-year-old will be fit in time for their next qualifier, away at Bosnia-Herzegovina on Monday in what promises to be a much more testing affair.

Belgium have no lack of options in attacking midfield roles, with the likes of Kevin De Bruyne, Dries Mertens and Adnan Januzaj all available to Wilmots.

The news may come as a concern to Jose Mourinho and Chelsea, whose next outing comes at Crystal Palace in the Premier League a week on Saturday.