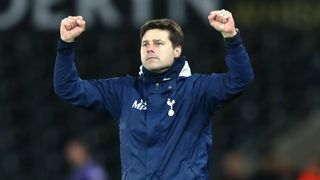 Tottenham chairman Daniel Levy insists there is no doubt over Mauricio Pochettino's future at the club and believes the manager loves Spurs.

Pochettino has led Tottenham to consecutive top-three finishes in the Premier League, this season's second place seeing them rack up an impressive total of 86 points.

The former Southampton boss declared he is staying with Spurs last week after heavy links to Inter, the latest of a number of clubs, including Paris Saint-Germain, to be credited with an interest.

And Levy expressed full confidence Pochettino will stay as he sat near the 45-year-old at a commercial news conference in Hong Kong, where the club increased their ties with short sponsor AIA.

"Mauricio is sitting right in front of us here," Levy said.

"I am sure he is not going anywhere. He loves us."

Tottenham play Kitchee in a post-season friendly in Hong Kong on Friday.