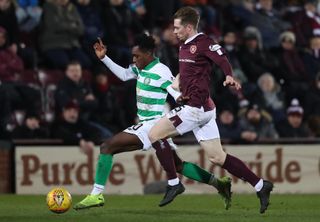 Hearts have continued their January clear-out by offloading Jake Mulraney and Craig Wighton.

Hearts agreed a fee with Atlanta United for the sale of winger Mulraney and loaned fellow forward Wighton to Arbroath.

Mulraney will join the Major League Soccer club when the American transfer window opens on February 12.

The Irishman scored two goals in 52 appearances after joining Hearts from Inverness 18 months ago.

The 23-year-old and Wighton had recently been told to train with the reserves as Hearts manager Daniel Stendel  reshapes his squad.

Stendel has been linked with a fresh move for former Ross County striker Liam Boyce, who has netted 14 goals for Burton Albion this season.

The signing of Mulraney was hailed by former Rangers defender Carlos Bocanegra, who is Atlanta’s vice-president and technical director.

Bocanegra told his club’s website: “We’re excited to add another quality attacking player to our club in Jake.

“He’s a direct player with a lot of pace who can play anywhere across the front three.

“As he’s in the middle of a season, Jake will be able to get up to full fitness quickly and immediately compete.”

Wighton has moved to Arbroath until the end of the season after a potential return to Dundee fell through.

Meanwhile, Rory Currie has gone on loan to Linfield for the rest of the season. The 21-year-old recently returned from a spell at Forfar, where he made one start and six substitute appearances.