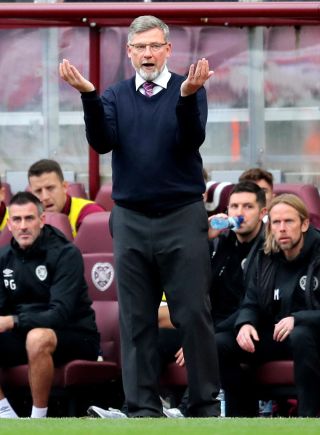 Hearts boss Craig Levein insisted he could not fault his players too much despite seeing them extend their winless run to four matches in a 0-0 draw at Livingston.

The Tynecastle side failed to break down their opponents, who played for most of the second half with 10 men after Aymen Souda was shown a red card.

Levein admitted he was exasperated at the result but felt his side had given him full commitment.

He said: “I’m frustrated. But I asked them to be really competitive today and I got that. They worked extremely hard and played well as a team.

“We took 15 minutes to adjust once Livingston went down to 10 men. But once we did that I felt we controlled the rest of the match. We should have scored and should have won, but I’m sure I’ve said that once or twice before.

“It was mainly our decision-making. There were great opportunities to cut the ball back and we’ve decided to shoot or blast the ball across goal. But it’s very difficult for me to fault anybody.

“The only time I can really criticise the players is if they don’t turn up, compete or stand up and be counted, but they did that today.”

Livingston manager Gary Holt refused to be drawn on the red card shown to Souda early in the second half after he appeared to catch Christophe Berra with a high boot.

“I didn’t see the red card as I was too far away,” he said. “But it isn’t for me to say. I don’t get involved with referees. They have a hard enough job. We will see if we can appeal but I won’t comment. I am a hot-headed red head, so I won’t speak to the referee.

Levein admitted he was not sure what the red card had been given for.

“I was surprised as I didn’t know what had happened,” he added. “Whether the referee was right or wrong I’ve no idea. The way things have been going I thought one of our players was getting sent off.”