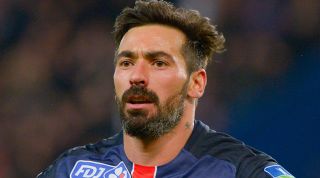 Lavezzi, who joined Hebei China Fortune from Paris Saint-Germain last year, elected for a slant-eyed pose which has landed him in trouble after it was brought to wider attention on social media.

In a statement released on Sunday, Lavezzi said: "I had no intention of insulting the Chinese people.

"I'm very happy to be here as part of the Hebei club. I have had great time here with my team-mates and it has been a great journey.

"Every Chinese person around me is friendly and I love my life here. I deeply apologise if this photo has offended the Chinese public and fans. I will be more careful in the future."

Hebei China Fortune also released an official apology, adding that the Argentina international has "expressed his love for China many times too".

Despite joining the Chinese Super League outfit in January 2016, Lavezzi scored his first goal for the club only last month.