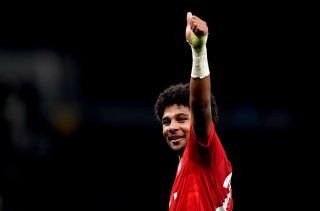 Arsenal fans and players past and present could not help but revel in former Gunner Serge Gnabry’s four-goal rout of Tottenham in the Champions League group stage.

Spurs were soundly beaten 7-2 by German champions Bayern Munich in north London, and Gnabry notched four of them as he announced himself on the global stage.

Gnabry came through as a teenager at Arsenal but was sold by the club to Werder Bremen in 2016, moving to Bayern the year after.

Arsenal fans endured mixed emotions, pleased to see a former Gunner score heavily against Tottenham, but regretful that the club sold such a promising talent.

Thankfully Gnabry scored so many times that it stopped being sad and became absolutely hilarious.— gunnerblog (@gunnerblog) October 1, 2019

“Gnabry 4 goals against Tottenham. WBA lost 1-0 at Leeds. You know what I mean,” he tweeted.

And former Tottenham striker Gary Lineker offered Spurs fans a small crumb of comfort after Gnabry’s hat-trick goal, tweeting: “Superb hat-trick from Serge Gnabry. Only consolation for @SpursOfficial is that @Arsenal let him slip through the net.”

Superb hat-trick from Serge Gnabry. Only consolation for @SpursOfficial is that @Arsenal let him slip through the net.— Gary Lineker (@GaryLineker) October 1, 2019

Champions League winner and former Manchester United centre-back Rio Ferdinand was sympathetic towards Tottenham’s players on BT Sport, saying: “We’ve all been there. We got beat at United, 6-1 against Man City our arch rivals.

“That feeling is a horrendous feeling and as a player all you want is a game to come round again – you’d take a game tomorrow.

“It won’t go away completely but you want the opportunity to go out there and put on a performance and get a result to revitalise not only your team and staff, but the fans as well.”