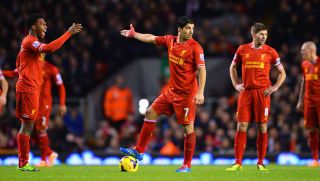 Brendan Rodgers' side have fallen off the pace in the race for the Premier League title, with the Merseyside club trailing leaders Arsenal by eight points.

Liverpool remain in pole position to claim a spot in the Champions League, but are ahead of Tottenham only by virtue of a superior goal difference.

Henderson played his part as Liverpool battled from two goals down to draw 2-2 with Aston Villa at Anfield on Saturday. And, while the England international was impressed with the team's resolve, the 23-year-old insists everyone must do their part to improve defensively.

Speaking to The Liverpool Echo, he said: "It's not just about the back four and the keeper, it's the whole team. I'm sure that's something we will work on.

"We're disappointed. We set such high expectations here. We want to go into every game and win it.

"Unfortunately, we couldn't do that, but the good thing is that from 2-0 down, we showed our character and our fight."

"Simon will get through it as he is really strong mentally," he commented. "I told him that the life of defenders and goalkeepers is like this.

"All keepers have sticky patches but he is a strong guy and he knows he has a big part to play in the season.

"It's not only Simon, everyone needs to react. The back four could have done better with everything. We know we have a strong defence as before we were keeping clean sheets.

"We will work on that in training and make sure we are better in the future."