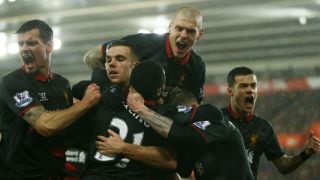 The visitors took a third-minute lead when Philippe Coutinho scored magnificently from 30 yards.

Southampton had a pair of early penalty appeals rejected and Brendan Rodgers' team were forced to repel plenty of pressure before Raheem Sterling sealed the points 17 minutes from time.

The victory lifts Liverpool up to sixth in the table, a point behind Southampton and two shy of fourth-placed Manchester United as the battle for UEFA Champions League qualification continues to heat up.

"It's a big win," Henderson told Sky Sports. "We knew coming here would be difficult because they're a good side and they've shown that all season.

"We knew we had to be at our best, [to] work really hard first and foremost.

"With the quality we've got we know we can hurt teams going forward, but I thought from the defence, right through the team, we were outstanding.

"It's a perfect away performance really."

Dropped points for top-four rivals United and Tottenham added to a pleasing weekend for Liverpool, but Henderson - who was captain at St Mary's  Stadium in Steven Gerrard's absence - is determined that events elsewhere will not distract last season's runners-up.

"It is a good weekend for us but the most important thing is we win, we keep winning and just concentrate on what we need to do," he added.

"The rest will take care of itself. Overall we're delighted with the performance and the result."