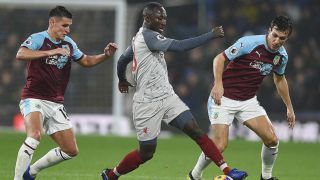 Naby Keita's performance for Liverpool at Burnley was described as "outstanding" by Jordan Henderson, who believes the Guinean is getting back to his best after overcoming injury.

The Reds came from behind to win 3-1 at Turf Moor as James Milner, Roberto Firmino and Xherdan Shaqiri overturned Jack Cork's scrappy opener for the struggling Clarets.

Keita, back in Jurgen Klopp's starting XI for the first time in two months, came agonisingly close to a first Liverpool goal when Joe Hart tipped a rasping drive onto the post and Henderson was thrilled to see his midfield partner back in the thick of the action.

"He started the season brilliantly and obviously then getting an injury set him back a little bit. But you can see how good a player he is," Henderson told the club's official website.

"That shot with the left foot and the save from Hart was fantastic. In his overall play he is comfortable on the ball and he helps build up play from the back.

"He drives the ball forward, which is big for us. I thought he was outstanding, along with everybody else really."

"We are not really interested in City, to be honest, because there is a long way to go," added Henderson. "We know how good they are, we expect them to win.

"We just expect ourselves to win games and perform to the level that we have been - and if we do that we can keep winning. But we just focus on game by game and it doesn't really matter about anybody else.

"The games are coming thick and fast, a lot of games in a short space of time but we showed we can use the squad and still perform to the level we know we are capable of and win games - and that's a big plus for us."