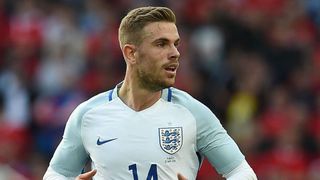 Southgate confirmed that his under-fire skipper will not be in the starting line-up for the World Cup qualifier, but insisted Rooney remains captain of the national team.

Liverpool midfielder Henderson will instead wear the armband in Ljubljana with Eric Dier taking Rooney's place in the XI.

Speaking at a pre-match press conference on Monday, Southgate stated that Henderson's experience of captaining Liverpool, where he took the over the role from Reds legend Steven Gerrard, made him the obvious choice.

"I've been very impressed with him," Southgate said. "What's stood out for me is that he's captained a club where he's had to take over from one of the most iconic players in English football [Gerrard].

"He has got a voice, an opinion and what he thinks we need to work on and a good tactical mind.

"It was not an easy decision as there are other senior players in the squad but, because he is the captain of a big football club, it was the right decision for me."

Great honour for Jordan Henderson to captain his country, delighted for him.October 10, 2016

Rooney said he believes Henderson is also the right option to take the captaincy.

"I think Jordan is a fantastic leader," Rooney said. "He has taken a difficult job from Steven Gerrard at Liverpool and grown into the position.

"He has great leadership qualities and he deserves his chance. It will be an incredibly proud moment for him and his family."

Southgate added he is expecting a tough game from Slovenia, but is targeting an away victory that would keep England at the top of Group F and extend their 100 per cent record.

"I've been impressed with what I've seen of Slovenia," Southgate said.

"It's clearly a very tight group but we want to leave here top of the table and to get a second away win would put us in a good position."