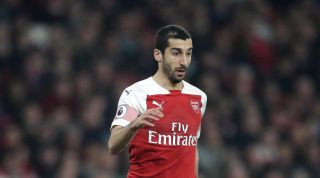 Roma are set to sign Henrikh Mkhitaryan before the European transfer window closes on Monday, according to Sky Italia.

Mkhitaryan appeared in Arsenal's 2-2 draw with Tottenham on Sunday as a second-half substitute.

The Armenia international started against Newcastle on the opening weekend but has since slipped down the pecking order at the Emirates Stadium.

And Unai Emery is willing to let the former Manchester United man depart for Serie A, say reports.

Roma will sign Mkhitaryan on a season-long loan with an option to buy the 30-year-old outright next summer.

The attacking midfielder has made 58 appearances for the Gunners since joining the club in January 2018.