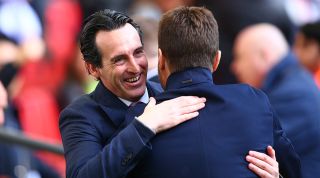 The manager’s first year in north London always promised to be one of transition, but his side finished fifth, reached a cup final and their striker scored 30 goals. In his sophomore season, his side came third. Without question, it was a success. His appointment was justified.

For Mauricio Pochettino at Tottenham, read Unai Emery at Arsenal? The Gunners must hope so. Pochettino’s second campaign at White Hart Lane may have featured the last St. Totteringham’s Day to date – Spurs’ final-day collapse at Newcastle allowing Arsenal to leapfrog them – but 2015/16 also brought a title challenge and the reward of Champions League football.

The sense is that Emery’s initial task is not to emulate Herbert Chapman, George Graham or Arsene Wenger as much as Arsenal’s nemesis, the man who helped reshape the pecking order in the capital and the Premier League: Pochettino.

Even amid the differences of a club accustomed to Champions League football and another that had enjoyed it once in half a century, there are common denominators in their situations and surroundings. The transformation of Tottenham’s fortunes is particularly pertinent to Emery as it highlights the area where Arsenal are in greatest need of improvement: their defence.

Conceding 50 goals is, unless you happen to be Brendan Rodgers’ Liverpool, a deterrent to a top-four finish. Arsenal have leaked 51 in each of the last two seasons. Tottenham sieved 53 in Pochettino’s debut year. Twelve months later, that was reduced to 35 and, but for that 5-1 thrashing at Newcastle, the numerical proof of progress would have been still greater.

Tottenham kept 13 clean sheets in 2015/16; they only conceded one goal in a further 18 games. In short, they made virtually every match winnable for a side that was capable of scoring goals. Part of that improvement came from coaching, and that was the season when the notion that Danny Rose and Kyle Walker represented the division’s best pair of full-backs gained currency, but part of it was a product of purchasing.

Both managers had a rash of centre-back combinations in their first year. If Toby Alderweireld, bought in 2015, was the catalyst for continuity and solidity at Spurs, that means David Luiz is charged with becoming his Arsenal counterpart. The Brazilian was at his erratic worst at Anfield and scarcely seems a paragon of reliability, but he is accustomed to playing in defences that concede fewer than 40 league goals. That must be Arsenal’s aim.

Bettering last season’s meagre tally of eight clean sheets is now the priority for a top-heavy team offering the potential of potency at the other end. Spurs’ greater resilience was reflected in Pochettino’s second season, including against the best: they halved their league defeats from 12 to six. Arsenal, beaten 10 times last season, could do with something similar.

Pochettino’s Tottenham took eight points against the big six in 2014/15; for Emery’s Arsenal, it was nine last year. Now they could do with imitating Spurs’ 15-point haul in Pochettino’s second campaign.

A second summer has brought the departure of the manager’s first-choice captain, even if Pochettino was quick to drop Younes Kaboul whereas Laurent Koscielny decided to part company with Arsenal. Each spent it discarding some of his inheritance: Kaboul, Vlad Chiriches, Benjamin Stambouli, Roberto Soldado, Lewis Holtby, Aaron Lennon and Emmanuel Adebayor at White Hart Lane; Koscielny, David Ospina, Carl Jenkinson, Danny Welbeck, Alex Iwobi, the retiring Petr Cech and Stephan Lichtsteiner (technically an Emery signing) at the Emirates.

Yet both clubs may have added an extra dimension in the final third: for Tottenham, while Son Heung-min’s first season was underwhelming, Dele Alli’s emergence brought Harry Kane support. Arsenal may look to Dani Ceballos and Nicolas Pepe for an equivalent, even if the Ivorian’s £72 million fee (compared to the £5m Spurs paid MK Dons for Alli) shows a difference in resources.

There was a more organic element to Pochettino’s progress, but Emery – as his selections of Ainsley Maitland-Niles, Joe Willock and Reiss Nelson show – has a similar willingness to experiment with English youngsters. He doesn’t pick on the basis of a pay cheque.

In each case, a maiden season represented a case of trial and error. Pochettino’s second campaign proved he’d learned when he erred. He excelled at exiling the unwanted and building a younger team. He took a side with a soft underbelly and forged a more formidable spine.

He did so after an inconclusive debut year. Emery may, therefore, spy both a rival and a role model in the opposing technical area on Sunday. Four years on, the challenge is to copy Tottenham, make that leap forward and then become fixtures in the top four.

The danger is that Arsenal are simply four years behind the neighbours they always used to finish ahead of on an annual basis.