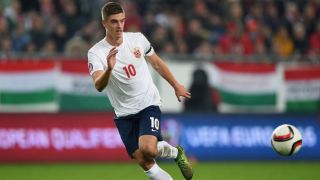 Henriksen, 24, spent four seasons in the Eredivisie but heads to the Premier League, with the move to be made permanent in January.

The attacking midfielder is a 27-time international and started his professional career in his homeland with Rosenborg.

Henriksen scored 19 goals in 41 appearances in all competitions last term, while he started this season by netting twice in three league games.

| We are delighted to announce the loan signing of Markus Henriksen from AZ Alkmaar August 31, 2016

He helped AZ win the KNVB Cup in 2013, a campaign in which he was named their player of the season.

Henriksen links up with international team-mate Adama Diomande at Hull, who also added James Weir and Dieumerci Mbokani to their ranks on Wednesday.