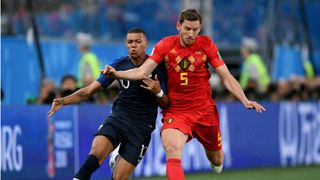 Samuel Umtiti headed in the only goal after 51 minutes at Krestovsky Stadium to set up a final meeting against Croatia or England for Les Bleus.

But it was Paris Saint-Germain teenager Mbappe who proved the most consistent and potent attacking threat within an otherwise cautious display from Didier Deschamps' side.

Vertonghen was deployed on the left-hand side of a hybrid three/four-man Belgium defence – a tactic head coach Roberto Martinez retained from the impressive 2-1 quarter-final win over Brazil.

Within the opening 10 seconds of the match, Mbappe darted past the Tottenham defender, who stuck to his task manfully from that point onwards.

"It's been a while because in the last three years with this coach I haven't been playing left-back and neither at Tottenham, so I had to switch on a bit," he said.

"The last two games were against Willian, Douglas Costa and now Mbappe. They were quite tough and obviously Mbappe has great quality. He's a great player."

France's robust qualities further back also caught Vertonghen's eye and he believes they present a tough ask for either potential final opponent this weekend.

"We knew it was hard to break them down. Against this French team you have to score the first goal and we didn't," he said ruefully.

"They're a great defensive team and they can be defensive because they've got the quality up front to break any team down."

If England meet France in Moscow in Sunday's showpiece, both captains will be drawn from the same club for the first time in World Cup final history.

"That shows how far Tottenham have come and how far we can still improve," he added. "Let's hope Harry and Hugo can walk onto the pitch together."