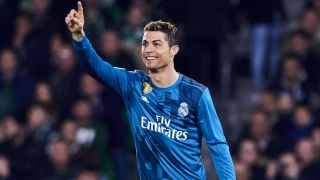 After not reaching his usual high levels early in the season, the Portuguese star has now scored 10 times in his past six games.

That run of form has left Zidane pleased as his team, who are fourth in the league, look for a push late in the campaign.

"He's looking good and we're thrilled to see him scoring and chasing things down up top," he said.

"We're heading into the business end of the season and every game is vital.

"To see all the players looking so sharp is fantastic and I'm very pleased."

Madrid are 17 points behind Barcelona in LaLiga, while they hold a 3-1 lead over Paris Saint-Germain ahead of the second leg of their Champions League last-16 tie on March 6.