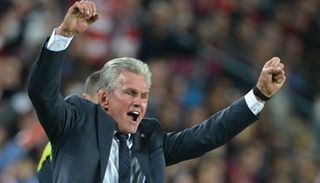 After Bayern inflicted the biggest aggregate defeat on Barcelona in European competition, a jubilant Heynckes said the painful reverse on penalties to Chelsea at their own Allianz Arena in Munich had given him the motivation to try to go one better this term.

The Bundesliga champions thrashed Barca 4-0 in last week's semi-final first leg in Germany before ending the La Liga club's 21-match unbeaten run at home in the Champions League with a crushing 3-0 win to set up an all-German final against Borussia Dortmund at Wembley on May 25.

"I was bitterly disappointed after losing the final last season but we started working straight away," Heynckes told a news conference.

"From the first day, you could tell that everyone was determined to change things," the experienced 67-year-old added.

"I think my desire to do better than last season infected the players."

Bayern's humbling of Barca, who have won two of the last four editions of Europe's elite club competition, prompted suggestions that the German club are poised to take over as the continent's pre-eminent force.

Their commanding performance over both legs, particularly the way they closed out World Player of the Year Lionel Messi in Munich, was hugely impressive and they remain on course for a treble of Bundesliga, Champions League and German Cup.

"We are a team that has a tremendous unity," said Heynckes, who knows Barca well from his time coaching at their La Liga rivals Real Madrid and Athletic Bilbao.

"We work fantastically well together and have a huge hunger for success," he added.

Heynckes is stepping down at the end of the current campaign and will be replaced by former Barca coach Pep Guardiola.

Guardiola took a year out to rest after four trophy-filled years in charge of his boyhood club and handed the reins to his close friend Tito Vilanova.

Heynckes has set the bar high for him and he will find it tough to match Bayern's success this term even if they are thwarted by Dortmund in the Champions League and VfB Stuttgart in the domestic Cup final.

After Bayern's success this term, Heynckes will be a sought-after man but refused to be drawn on his future, only saying that he had had no contact with his former club Real.

"I know what I am going to do after the cup final [on June 1]," he said. "I have been in football for 50 years and I think one day you have to think it will be over."